HIOKI is pleased to announce the launch of the Impulse Winding Tester ST4030, the company’s first instrument to provide functionality for testing for defects in motor windings.

The ST4030 uses the new method of response waveform quantification*1 to detect layer shorts (insulation defects)*2 that cannot be detected by the standard approach of comparing area values arising from discrepancies between waveforms. Additionally, the new instrument delivers the performance to detect waveforms with a high degree of precision thanks to 12 MHz sampling and 12-bit resolution, and it can be used with the Discharge Detection Upgrade ST9000 (featuring proprietary HIOKI filtering technology)*3 to detect partial discharges caused by pseudo-shorts*4.

DEVELOPMENT BACKGROUND
Impulse winding testers are used to test for layer shorts between windings that occur in components such as motor inductors or coils.  Typically, the waveform captured when the impulse voltage is applied to a known-good part (the master waveform) is used as a reference to generate pass/fail judgments by comparing it with a test waveform to gauge any differences in area.

However, it is difficult to detect failures, for example, single-turn faults, that do not appear in waveforms using the typical inspection method of comparing waveform area values.  Additionally, there has been increasing demand from manufacturers for the ability to detect minuscule partial discharges that are obscured by noise so that motor deterioration can be diagnosed with a high degree of precision. HIOKI developed the ST4030 to meet these requirements.

KEY FEATURES
1. New Solution - Detect single-turn faults by quantifying response waveforms
The ST4030 makes quantitative judgments by digitizing response waveforms. Since n-turn shorts such as single-turn faults that cannot be detected by the typical approach of comparing the area of waveforms do appear as differences in the values, the instrument can distinguish clearly between defective and non-defective parts.

2. Proprietary HIOKI Technology - Detect pseudo-shorts with the Discharge Detection Upgrade
Pseudo-shorts can be identified by detecting discharges. However, the phenomenon is difficult to differentiate from noise components due to the small difference in voltage it produces and the high frequencies involved. The ST4030 delivers the performance needed to detect waveforms with a high degree of precision, and the Discharge Detection Upgrade ST900 (featuring proprietary HIOKI filtering technology) can be used to reject noise components from high-frequency components appearing in response waveforms so that partial discharges can be isolated and used to generate pass/fail judgments.  Additionally, the ST9000 eliminates the need for additional equipment required in the traditional approach (for example, antennas used to detect discharges). 4. High-precision waveform detection
The ST4030 can detect waveforms with a high degree of precision thanks to its 200 MHz high-speed sampling and high 12-bit resolution.

5. Use accumulated data to increase test quality
Quantification of response waveforms allows test data to be managed in a numerical manner. By subjecting accumulated data to statistical processing and providing it as feedback to upstream processes, customers can help estimate and prevent winding defects and thereby improve quality.


*1 Response waveform quantification utilizes patents owned by Toenec Corporation.
*2 Layer short: The windings in a coil (including the motor) must be covered with insulation (enamel), but the insulation resistance may be compromised due to a defect, resulting in a short-circuit. Such shorts are known as layer shorts or rare shorts. Principal causes include damage to the insulation due to heating or mechanical friction as well as deterioration over time.
*3 Developed jointly with Aisin AW Co., Ltd.
*4 The Discharge Detection Upgrade ST9000 is a factory option.
*5 The rotor is the part of the motor that rotates when current is passed through it.
About HIOKI
Established in 1935, HIOKI E.E. CORPORATION (TSE: 6866) has grown to become a world leader in providing  consistent delivery of test and measuring  instruments through advanced design, manufacturing, and sales and services. By offering over 200 main products characterized by safety and quality while meeting an expansive range of applications, we aim to contribute to the efficiency  and value of our customers' work  in research and development, production and electrical maintenance. HIOKI products and services are available around the world through our extensive network of subsidiaries and distributors. Information about HIOKI is available at www.hioki.com. 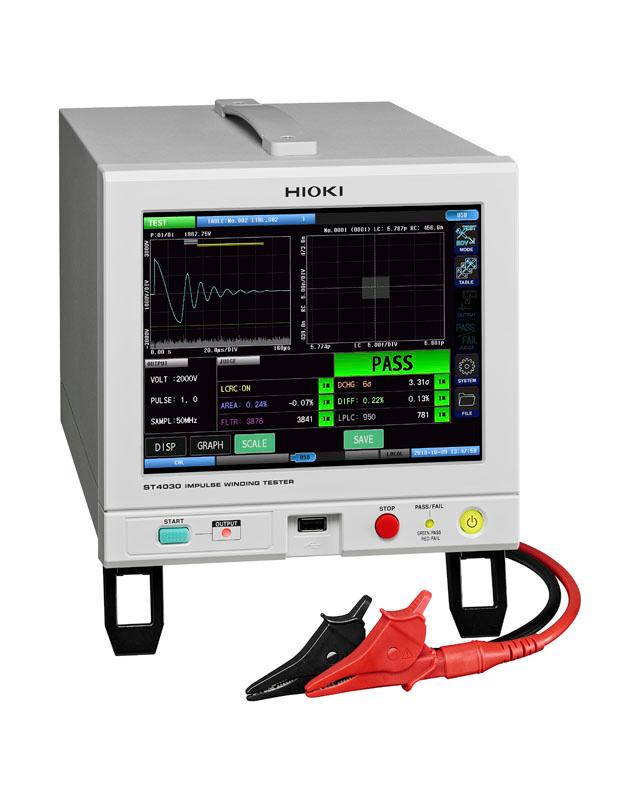