Hioki is pleased to announce that its Memory HiCorder MR8827, Current Probes CT6700 and CT6701, AC/DC Clamp On Meter CM4371 and CM4373, and Power Analyzer PW6001 have been recognized with the 2015 Good Design Award by the Japan Institute of Design Promotion.

The Memory Recorder MR8827, one of the instruments recognized by the Institute, delivers improvements such as a twentyfold increase in sampling speed while inheriting the multichannel measurement capabilities of previous models.

The Current Probe CT6700/CT6701 offers 10 times the sensitivity of previous products and can clearly measure the waveforms of even minuscule, 1 mA currents.

The AC/DC Clamp On Meter CM4371/CM4373 features a number of improvements over previous products, including a more physically robust design for the current sensor portion of the instrument and an expanded operating temperature range, allowing it to measure AC and DC currents in even harsh environments.

The Power Analyzer PW6001 offers world-class measurement accuracy along with high stability thanks to a broader range of measurement frequencies and better noise resistance than previous products.

The Good Design Award program has been comprehensively evaluating product designs and recommending them to consumers for more than 50 years. Since receiving its first Good Design Award in 1985, Hioki has won the accolade 63 times (including two Long-life Design Awards).

MR8827 Memory HiCorder: “This waveform recorder can measure up to 92 channels simultaneously with a high degree of flexibility thanks to its modular input unit architecture, even though it features a compact design that fits into a system rack. Due to the possibility that signals of differing potentials may be input simultaneously when the instrument is connected to multiple circuits and channels of input, the MR8827’s input channels are isolated from one another and from the enclosure to ensure equipment safety and user peace of mind. The instrument also incorporates an A4-size printer that generates large, high-definition output so that printouts of multichannel waveforms do not contain overlapping graphics that would be hard to discern. I was highly impressed by the functional improvements and the overall design of the human interface.”

CT6700 and CT6701 Current Probes: “These high-sensitivity, switch-type current probes are capable of observing a variety of current waveforms, including DC and high-frequency signals. The devices use a general-purpose BNC terminal to connect to the host instrument, but the probe’s BNC terminal connector is designed for easy attachment and detachment. It locks automatically when inserted and can be easily disconnected by pulling a dedicated lever to release the lock. In addition, the connector incorporates functionality to reject noise just before the host instrument, including noise picked up by the cable between the probe and the instrument. I was highly impressed with the design, which delivers high sensitivity, low noise, and ease of use.”

CM4371 and CM4373 AC/DC Clamp Meters: “Clamp-on meters are instruments that can safely measure current without contact by being placed around the wire being measured. The circumference of the cross-section of the product’s enclosure gets continually larger toward the end in order to allow the meter to be pushed into a group of closely spaced wires, and there is rubber along the sides of the enclosure where it comes into contact with the fingers to provide enhanced grip. In addition to the product’s excellent basic performance as a measuring instrument, I was impressed by the attention given to functionality and ease of use throughout the excellent design.”

PW6001 Power Analyzer: “This power meter delivers a sophisticated combination of measured value accuracy and stability. In addition to the performance of the instrument itself, which includes uniquely shaped shielding consisting of skived metal, improved noise resistance made possible by photo-isolating devices, and the world’s first oscilloscope function to be provided in a power meter, I was very impressed by the level of reliability and safety in the design, including in the human interface, for example in the prevention of erroneous input and short-circuits with sliding covers and dividers on the input units and the elimination of the need for printer paper output with memo functionality that lets users annotate measurement data displayed on the touch panel screen with a keyboard or pen.” 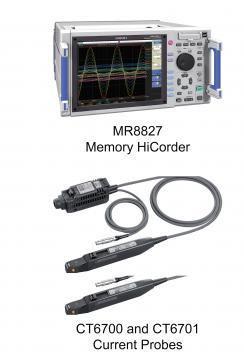