What is a Current Probe?

Home Knowledge Center Test Tools What is a Current Probe?

What is a current probe? A convenient instrument that can measure current without shutting off the circuit

Many people use digital multimeters to measure properties such as current, voltage, and resistance. However, those instruments have a distinct disadvantage: to measure current with a digital multimeter, you have to shut off the electrical circuit so that the device can be connected in series.

This is where current probes come in handy. Since they don’t require an electrical connection to the circuit being measured, current probes provide an easy and convenient option for maintenance and troubleshooting work. This page provides a detailed introduction to current probes.

What is a current probe?

Instead of measuring current on their own like a digital multimeter, current probes are used in conjunction with an oscilloscope. They’re optional parts, but some can cost as much as the oscilloscope itself. The most noteworthy characteristic of current probes is their ability to measure AC and DC current in a non-contact manner, without requiring the electrical circuit to be shut off.

On a practical level, it’s often impossible to cut wires.

Digital multimeters, a common tool for measuring current, have to be connected in series with the circuit being measured, which means that the circuit has to be shut off while it’s measured. Current probes come in handy when you don’t want to do that.

Digital multimeters are convenient when you want to measure current and the electrical circuit is exposed, for example during the manufacturing process of an electronic device. However, there are many cases where it’s not possible to shut off a circuit so that it can be measured, for example when performing maintenance inspections of electronic equipment that is already operating or trying to pinpoint the location of a malfunction or failure.

In such situations, an instrument like a current probe that lets you measure current simply by clamping it around a wire can be extremely useful.

How, then, can current probes measure current without being connected in series? Current probes utilize various methods to detect the magnetic field that occurs around the current being measured. These instruments are available in a variety of models, including some designed to measure AC current alone and others that can measure both AC and DC current.

They can convert the current into a voltage and measure how the current is flowing. There are four primary methods by which current probes measure current. The method should be chosen based on the application.

Current sensors are comparatively inexpensive and don’t require a power supply, but they can only measure AC current. 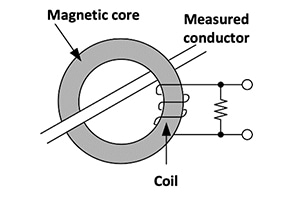 These current sensors can measure DC current as well as AC current at frequencies of up to several kilohertz. The linearity of the Hall element and the effects of the magnetic core prevent them from offering a very high degree of precision. Additionally, they have the disadvantage of not being well suited to measurement over extended periods of time because the characteristics of Hall elements include drift caused by temperature and the passage of time. 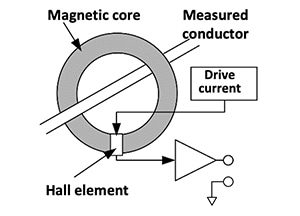 Since they lack a magnetic core, Rogowski coil type current sensors can detect AC currents without magnetic saturation. These probes convert the voltage induced in an air core coil by the AC magnetic field that surrounds the current being measured. They have low impedance and lack the heat generation, saturation, and hysteresis caused by magnetic loss. 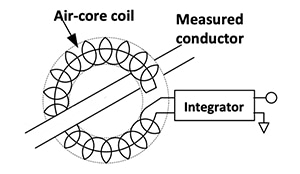 These devices improve the CT method’s characteristics in the low-frequency band. They have low phase error, making them well suited to power measurement. They also have a broad frequency band. However, they cannot be used to measure DC current. 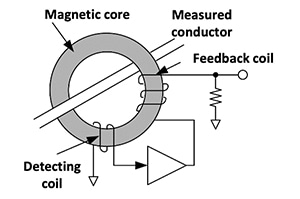 These sensors combine the CT method with a Hall element, allowing them to measure both DC and AC current. 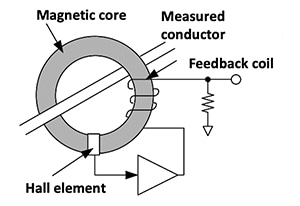 These sensors combine the CT method with a FG (fluxgate) element, allowing them to measure both DC and AC current.
Since the fluxgate exhibits an extremely small offset drift across a broad temperature range thanks to its operating principle, it can achieve exceptionally accurate and stable measurements, making this type of current sensor ideal for pairing with high accuracy power meters for uncompromising precision 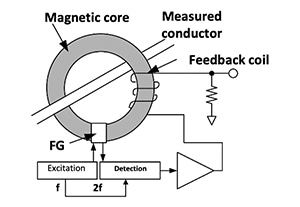 Examples of current probe use

Current probes are used in a variety of situations. This section introduces several examples. 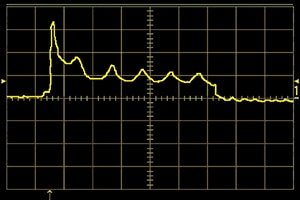 Starting current in a car starter

Current probes are used to measure control currents for relays in electronic circuits and in evaluation testing of capacitors’ current characteristics. When testing devices with electronic circuits to ensure that they operate as designed, it’s important not to overlook noise waveforms in the high-frequency band. Additionally, current probes can be used to measure current waveforms during short-circuit testing, evaluate how batteries in electric vehicles (EVs) respond to abrupt changes in load, and measure in-rush current waveforms, among other applications. 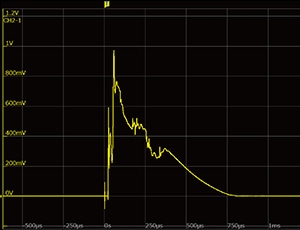 Inrush current waveform when an electric device is turned on

Current probes are used to evaluate switching elements that are designed to drive circuits in electronic devices such as LEDs and motors. They can measure on/off cycles, ripple waveforms, and switching loss in semiconductor devices that are driven at high speeds. 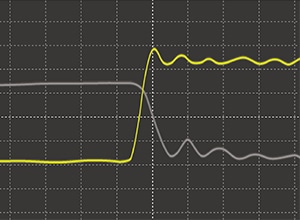 Waveform of an inverter when switched ON

There are multiple current probe measurement methods; review them carefully.

Unlike digital multimeters, which require that the electrical circuit be shut off so that they can be connected in series, current probes are convenient tools that can measure current simply by being clamped around wires. Since they’re used as optional parts for oscilloscopes, they require an oscilloscope. And since there are multiple methods for using them to measure current, it’s important to review those methods carefully in light of your particular measurement application.