Although they can detect circuit defects, automatic optical inspection (AOI) systems are unable to guarantee electrical conductivity or test inside through-holes. Additionally, a full and complete testing regimen must include tests of individual inner layers.

While flying-probe systems can electrically test capacitors and resistance values on nets, there are defects that go undetected within the range defined by user-specified threshold values. An analysis of X-ray images of through-holes from one board on which an anomaly was detected and another on which no anomalies were found revealed differences in thickness and volume. An analysis of X-ray images of internal patterns from one board on which an anomaly was found and another on which no anomalies were found revealed pattern tapering. AI-based learning and detection of resistance value distributions were able to detect an artificially created “mouse bite” defect as well as a scratch on the inside of a through-hole. When resistance values are tested using a flying-probe tester, changes in resistance caused by defects can be obscured by variations caused by factors such as plating thickness.
The Process Analyzer Pro UA1801’s AI-based teacher-less learning capability detects latent defects by identifying singularities in such obscured resistance values. 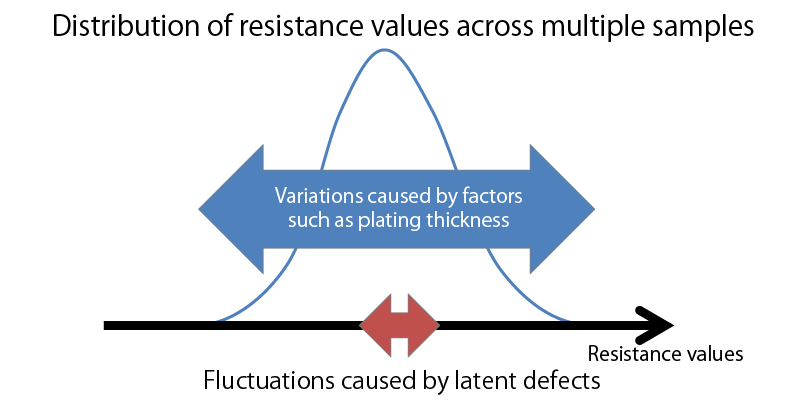