What is a Clamp Meter?

Home Knowledge Center Test Tools What is a Clamp Meter?

What is a clamp meter? Clamp meter basics, measurement principles, and other information

If you’re like most people, analog multimeters and digital multimeters come to mind as examples of instruments used to measure current. However, a clamp meter is the recommended solution when you need to measure a wire without first cutting it.

This page provides a detailed introduction to clamp meter basics and measurement principles, along with tips for choosing a clamp meter and basic instructions for using it.

What can clamp meters measure?

A clamp meter is a clothespin-shaped instrument that can be clamped around a live wire in order to measure the current it’s carrying. The typical multimeter has to be inserted in series with the circuit under measurement, requiring that it be cut first. By contrast, clamp meters can measure the current flowing in the wire around which they’ve been clamped by detecting the magnetic field generated by the current.

In short, they can measure current flowing to a machine or electronic device as it continues to operate. Clamp meters are available in a number of variants, but they can be classified in terms of what they measure as follows:

Naturally, no one clamp meter can measure all of those parameters. You’ll need to choose the best clamp meter for your specific application.

A flowing current generates a magnetic field in the shape of concentric circles. The strength of the field is proportional to the magnitude of the current, and the direction of the field is equivalent to the direction a screw is turned to tighten it. This principle, which is utilized by clamp meters, is known as Ampere’s right-hand screw rule. 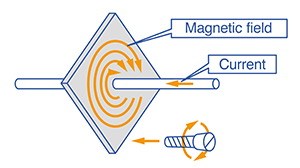 Tips for choosing a clamp meter

Since clamp meters are available in numerous variants, it’s necessary to use a model that suits your purpose. Below are some tips for choosing the right instrument:

Current to be measured

The type of clamp meter that should be used also depends on whether you’re measuring a DC or AC current. AC current measurement can involve varying frequencies, so be sure to check the clamp meter’s frequency band.

Compatibility of the instrument with the cable thickness

The thickness of cable to which the instrument can be clamped varies with the clamp meter. You’ll need to ascertain the thickness of the wire you wish to measure.

Magnitude of the measurement current

Be sure to check whether the maximum current value associated with the load on the wire being measured falls within the clamp meter’s current range.

Clamp meters also offer a range of other functionality, so it’s recommended to choose an instrument with the required capabilities. 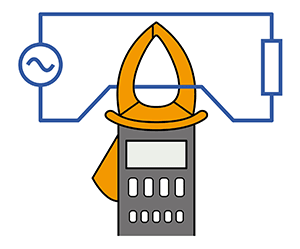 If you clamp the instrument around two wires in a single-phase circuit, you won't be able to measure the current accurately. As Ampere’s rule indicates, the two wires carrying currents in opposite directions generate fields that counteract each other.
Attempting to measure the magnetic field in this situation results in a result of zero since the two fields cancel each other out. When measuring leakage current, the instrument is sometimes clamped around two wires instead of one. (When measuring leakage current in a ground wire, the instrument is clamped around one wire.) Leakage current is current that flows through the load’s insulation resistance, generally on the order of several microamperes or less under ordinary conditions.

Choosing the best clamp meter for your application

Because clamp meters allow the operator to measure current simply by clamping the instrument around a wire, they are useful in a variety of applications, for example measuring current when a machine is already operating. Be sure to choose a clamp meter once you have a solid understanding of what it is you need to measure.