Failure to keep parts of a lithium-ion battery that should be insulated from each other in a state of isolation could lead to reduced battery life or fire. Factors that lead to a decrease in insulation resistance include the presence of metal contaminants during the manufacturing process and tears of the separators. During insulation resistance testing, it’s necessary to ascertain minuscule voltage and current changes so that defective batteries can be detected.

• Customers wish to perform a testing that can reliably detect internal defects in batteries that could not detected by conventional insulation resistance testing and withstand voltage testing to date.
• Customers wish to solve the issue of defects that have slipped through conventional testing using oscilloscopes and recorders due to those instruments’ sampling rate and resolution characteristics. This section introduces insulation resistance testing using the BT5525’s BDD (breakdown detect) function. This function combines an analog circuit (peak hold) with digital sampling (5 MS/s) to monitor minuscule voltage and current fluctuations. It can detect minuscule changes reliably by monitoring the amount of change in the voltage during charging and the amount of steady-state voltage and current change during the battery’s static state after charging. This approach solves the issue of defects going undetected due to sampling timing and resolution, which affect waveform measurement when conventional oscilloscopes and recorders are used. The instrument counts the number of changes exceed the user-configured thresholds. Detected results are stored in the instrument’s internal memory (which can hold up to 99 data points), and they can be retrieved by command. In addition, the BDD STOP function can be used to halt measurement immediately upon BDD detection. This capability reduces damage to the circuit under measure and prevents a decline in the yield of the production process.

CV V
Insulation defects are detected using the voltage value (V) during the static state after charging. Judgments are made using the steady-state voltage (voltage after stabilization). Setting range: 0.1 V to 500.0 V

CV  I
Insulation defects are detected using the amount of change (%) in the steady-state current following charging. Judgments are made using the current value immediately prior to the change. Setting range: 0.1% to 999.9% 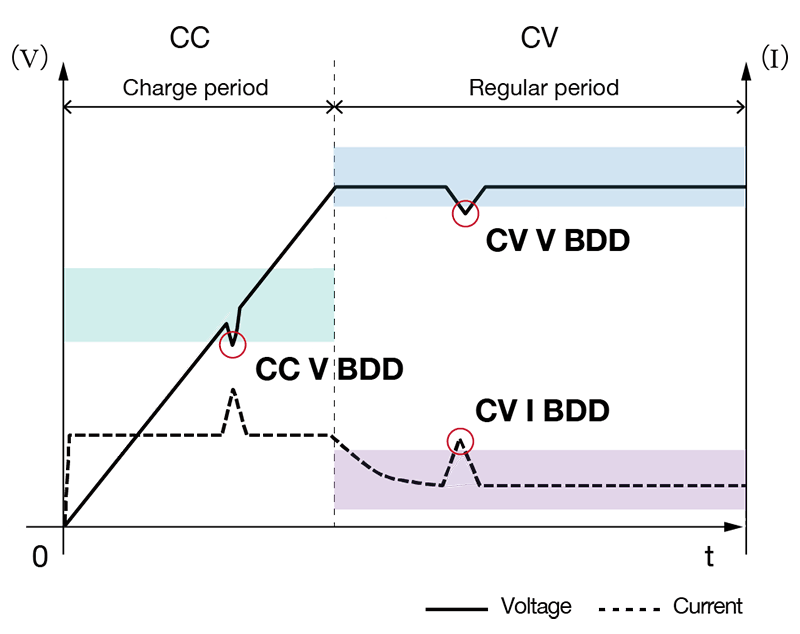 Hioki prepared a lithium-ion battery with defective insulation caused by foreign-material contamination. Insulation resistance testing was carried out using the BDD function between the battery’s anode and cathode before filling electrolyte.