Version upgrade should be conducted by a qualified technician familiar with the functions and operations of model IM3570.
If you are uncertain as to how to proceed, please contact your local Hioki distributor for assistance.

・All software provided here is freeware and the best version currently available.
・If the problems or errors during this download and install lead to malfunction, please contact your dealer or Hioki representative.
・The ownership, intellectual right and all other associated rights relating to the software provided here belong to Hioki E.E. Corporation.

Firmware for the model IM3570

The latest firmware version is shown below. A version update is highly recommended if you are running older version.
・Firmware Version : V3.11

The version number of firmware can be checked by selecting the ”INFO” tab of the System screen. 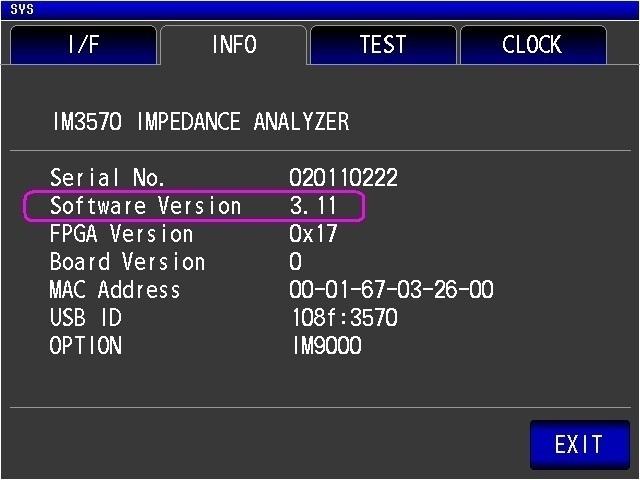 V3.03 (September 2012)
Added Functions:
1.Added a communication command (:HCOPy:DATA?) which acquires BMP data from the measurement screen.
2.Added a function that saves/reads (ALL LOAD) all function settings including the panel into the USB flash drive.
3.Added a function that interrupts measurement when there is a contact check error during Continuous Measurement.
4.Added a function that pauses the measurement when the judgement is FAIL during Continuous Measurement.
5.Added a ”step function” which requests triggers in each panel during Continuous Measurement.
6.Added a function that calculates the electromechanical coupling coefficient. (IM9000 option)
7.Added a function which performs equivalent circuit analysis after reading the measurement value saved in the USB flash drive. (IM9000 option)
Improved Functions:
1.Faster speed of the instrument’s overall performance/operation.
2.Faster measurement speed during Continuous Measurement.
3.Improved the internal trigger averaging method when there is a measurement anomaly.
4.Changed the parameter that performs average, from ”Z-PHASE” to ”G-B(R-X)”.
5.Restored both the ”comparator function” and ”BIN function” settings in LCR mode when switching from Continuous Measurement Mode to LCR Mode.
6.The equivalent circuit mode (Serial/Parallel) is displayed as the parameter in the ”panel save” and ”panel load confirmation” screens.
7.Improved the icon that shows the access status of the USB flash drive.
8.When performing SPOT compensation, the compensation values that was acquired before will be initialized.
9.When sending the command (:FILE:FOLDer) which specifies the folder in which to save the files, the saving mode has changed from ”AUTO” to ”MANUAL”.
10.When changing the ”measurement parameter” during analyzer measurement, the measurement value reverts to the value that was present when the power was turned on.
11.When changing the measurement conditions during Step Measurement, the instrument is reverted to the initial measurement condition and does not perform the next measurement.
12.The settings of trigger synchronous output can be changed when in Analyzer Mode.
13.Disabled equivalent circuit analysis and simulation during measurement. (IM9000 option)
14.When the peak value cannot be found during equivalent circuit analysis upon querying the peak frequency using the command (:MEASure:ANALysis:PEAK?), rather than returning with an operation error, the actual error value (99999E+28) will be returned. (IM9000 option)
Fixed bugs: the following issues were remedied
1.During DC measurement and the CC function or the Current Limit Function was enabled, sometimes the generated signal level was not output according to the set level.
2.When both the CV(CC) and Limit Functions were enabled and an error occurred, it was difficult to identify whether the error was a CV(CC) or a Limit Error.
3.When measuring using ”comparator” or ”BIN measurement” with an internal trigger, it was found that after compensation but before returning to the measurement screen, measurement would nevertheless occur once.
4.When touching the screen while measurements were being saved to the USB flash drive, sometimes the instrument hung.
5.Upon sending the command to set the LOAD compensation capture conditions during DC measurement (:CORRection:LOAD:DCResistance:CONDition), the level value setting was accepted in terms of mA units.
6.When printing the screen during measurement with an internal trigger, sometimes the part showing the measurement values was illegible.
7.In LCR mode whereby the second and third parameters were set to the same value, after the scaling compensating coefficient for each was set, upon measuring in Analyzer Mode, the scaling for the third parameter was found to be uncompensated.
8.In the Memory Function, when the query (:MEMory?) to acquire the memory data was sent despite the absence of any memory data, sometimes data failed to be saved in memory thereafter.
9.The command (:MEMory:POINts) to set the memory size was valid even when the Memory Function was turned ON or IN.
10.Problems with the header section of the header of query (:COMParator:SLIMit:MODE?) that acquires the judgement mode of the third parameter of the comparator function.
11.A screen error sometimes occurred when changing the measurement conditions using PC communications during Analyzer Mode.
12.A drawing error sometimes occurred when executing the command to change the sweep conditions during Analyzer Measurement.
13.The instrument hung when the command ”*TRG;:[compensation start command]” was executed during Analyzer Measurement.
14.The instrument hung when executing the [compensation start command] during Step Measurement in Analyzer Mode.
15.When sending the query (:MEASure:CURSor?) to acquire the measurement value of the cursor after sweep measuring from high frequency to low frequency, the correct value was not returned.
16.An output error from the EXT I/O’s /ERR terminal occurred during Analyzer Measurement.
17.When sending the search command (:SEARCH), the B cursor followed the same search conditions as the A cursor to conduct the search.
18.In making the settings for ”Start-Stop” and ”Center-Span” in Analyzer Measurement, the minimum step for frequency could not be set.
19.An output error from the EXT I/O’s /ERR terminal occurred during Continuous Measurement.
20.The instrument sometimes hung when the STOP key was pressed on the screen during Continuous Measurement.
21.When sending a query (:MEASure:CONTinuous:COMParator?) in binary mode to acquire the overall judgement results during Continuous Measurement, the returned response was in ASCII format.
22.When sweep measuring from high frequency to low frequency and then limiting the analytical range of the equivalent circuit, analysis could not be performed. (IM9000 option)
23.The cursor did not display properly when the No.1 parameter was turned OFF in the X-Y graph display. (IM9000 option)

V2.04 (July 2011)
Fixed bugs:
1.Fixed a but that error information of the last measurement remained.
2.Fixed a bug that terminator of response message could not be set via a communication command.
3.Fixed a bug that when the GPIB command LLO (Local Lock-Out) was active, even if the GPIB command GTL (Go To Local) was sent, a local operation could not be restored.
4.When performing AC measurement in Low Z high accuracy mode, setting Constant Current level and using DC bias, if the total value for the measurement signal level (AC level + DC bias value) becomes [V] due to changing DC bias, AC level will be compulsorily changed in order that the total value becomes [V] . Fixed a bug that the AC level value was compulsorily changed to one tenth of the desired one.
5.Fixed a bug that when performing continuous measurement, Comparator (BIN) judgement result was not reflected on overall judgement result.

V2.02 (April 2011)
Improved functions:
1.Faster touch panel response.
2.Cancel function is now available on Panel calibration screen.
3.When a key on a touch panel screen is pressed, the key pressed is now recognizable by its highlighting and with a green circle on it.